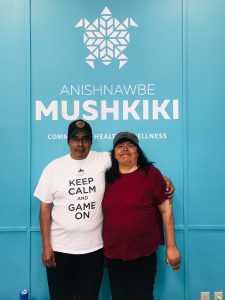 All information in this profile was provided by the patient and was published with her knowledge and consent.

Rayann has been a patient of Anishnawbe Mushkiki for many years but she has recently taken a more active role in her health care and has seen many positive changes because of it.

Rayann explains “I’ve had diabetes for awhile. I never really thought about it, and I didn’t make any changes in my life. I was on metformin for a long time, but then in 2017 I experienced a tragic loss and got really stressed out and my blood sugars went really high. I was in the hospital a few times because my blood sugar was in the 30’s. They would fix it, but then it would happen again. I didn’t want to start on insulin but I had to. I started in October of 2017 and even though my body felt better, I wasn’t happy. I felt stuck, like I couldn’t do what I want because I always had to think about my needles – morning, lunch, and dinner. By August of 2018 I decided that I wanted to try to get off my fast-acting insulin I took at meals. My health care team at Mushkiki was really supportive but were honest with me that getting off of insulin would be a lot of work and that my body might always need that extra help. But I really wanted to try. “

Rayann’s diabetes education team was supportive of her goal. Kerri, her registered nurse remembers “When I first started working with Rayann as her diabetes educator, she had very specific goals about her diabetes.  One of the goals was to get off insulin. She displayed a lot of patience and trust in her diabetes team when it came to making recommendations about her diabetes medications, and was always open to learning about how she can improve her overall health.”

Rayann came to rely on the personalized care she got from the diabetes team. “I got a lot of help from Emma and Kerri, the diabetes team at Mushkiki. I came to see them every month and I was able to call them for help whenever I needed help or had a question.”

But personal motivation and professional guidance aren’t always enough to make lifestyle changes that stick. Rayann also had a lot of support from her partner Zep. “Zep and I started to make changes in our eating, like we cut out a lot of fast food and cooked more things at home” says Rayann. ”In January of this year (2019) the diabetes team got us involved with the health programs here at Mushkiki. We started going to the walking program, and the diabetes drop-in education program. Then we did some of the cooking classes and started buying the Good Food Box.”

Zep says the changes have been good for him too. “I’ve lost weight, and I am more careful about what I eat. I’m learning a lot about food, like what is a carb and how much sugar is in things”.

Rayann and Zep have incorporated more walking into their lives, using a pedometer to track steps. At one of the kitchen programs, Zep learned to make pasta sauce from scratch! “Now he makes it a lot” laughs Rayann.

Those programs team say Rayann and Zep are a welcome sight at many of the programs offered at Mushkiki. “Rayann and Zep have such a positive attitude, and are really proud of what they’ve accomplished. They are always telling us about changes they’ve made – like making more food at home” says Cathleen, one of Mushkiki’s community health promoters. “They are so interested in learning and are willing to try new cooking techniques and new foods. They have a great sense of humour and they are very supportive of each other.”

Over time, Rayann noticed things improving with her diabetes. ” When I was making all these changes my blood sugar levels started to come down and the team starting cutting back on my insulin. I got off my lunch time dose first. That was great – much more freedom because then I could go out during the day. By June I stopped taking all my fast-acting insulin. We have adjusted some of my other medication, but I feel good and my sugar is stable. And I’ve lost weight!”

Kerri and Emma, Rayann’s diabetes educators sum it up well. Emma says “We are so proud of Rayann for all the hard work she has done! She has taken charge of her health and put in the work in to see positive results with her diabetes. She is proof that lifestyle matters when it comes to managing chronic disease. She inspires us with her commitment to her health and we hope she will spark change in others.” Kerri agrees. “Not only did Rayann meet her goal of getting off insulin, she set the foundation for a healthier lifestyle, all the while of having a smile on her face, and a few laughs along the way. Way to go Rayann!”

So what’s next for Rayann? “I’m working hard to keep going with all the changes. Keep walking and eating more healthy foods. It’s not as hard now. It was hard at first to give up all the fast food, but now it’s easier.” Rayann also has goals beyond her health “I want to go back to school and finish my GED. I only have 4 credits left. I feel like I can do it”.

There are no upcoming events at this time

We support and empower families and communities committed to preserving their culture and to living a balanced, traditional way of life while achieving optimal health and social well-being.

Now Open to the General Public

Many of our programs are provided in partnership with other organizations in locations throughout Thunder Bay.

In response to the 2019 Novel Coronavirus (COVID-19), Anishnawbe Mushkiki must make changes to our programs and services to protect our clients, staff and the communities we serve.

Hours have been updated to:

All community programs have been cancelled pending further notice. The situation will be evaluated and programs will be restarted when it is safe to do so.